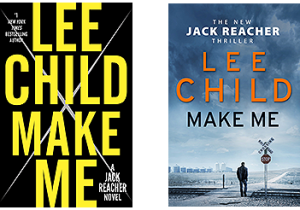 Lee Child begins Make Me with Jack Reacher getting off a train in the middle of nowhere, a place called Mother’s Rest. Reacher stops there on a whim but soon finds himself being followed. Reacher meets Michele Chang, a former FBI agent who now is a private detective. Her partner has disappeared. Reacher is drawn into the search which leads to some very dark places. Make Me is the 20th Jack Reacher novel, but you don’t have to read the other novels in the series to enjoy this book. Lee Child has created a compelling character over the past 20 years. I’ve enjoyed the action and cleverness in this series. I found the conclusion disturbing and memorable. If you’re looking for a fast-moving suspense novel, Make Me is first-rate. It’s the best book I’ve read in 2016 so far. GRADE: A

16 thoughts on “MAKE ME By Lee Child”