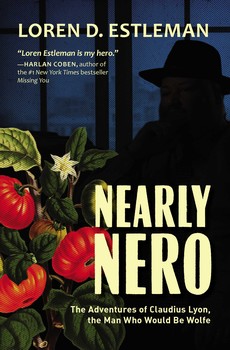 Loren D. Estleman wrote a series of Nero Wolfe pastiches and now they’re collected in a slim book, Nearly Nero. Estleman goes the humorous route in these stories with a wealthy eccentric who calls himself “Claudius Lyon” in homage to Nero Wolfe. But Claudius Lyon is a decidedly “low rent” Wolfe. Instead of raising orchids, Lyon raises tomatoes. Instead of Archie Goodwin, Lyon hires an ex-con named Arnie Woodbine. And Lyon, for several reasons, doesn’t charge for his investigative services. If you’re a fan of Rex Stout’s Nero Wolfe series, you’ll get a kick out of these clever pastiches. GRADE: B
TABLE OF CONTENTS:
“A Legacy: And How to Twist It [Almost] Beyond Recognition: A Preface” By Loren D. Estleman 9
“Who’s Afraid of Nero Wolfe?” 17
“The Boy Who Cried Wolfe” 41
“Wolfe at the Door” 61
“Wolfe on the Roof” 81
“Wolfe Trap” 85
“Wolfe in Chic Clothing” 99
“Wolfe in the Manger” 119
“Wolfe and Warp” 141
“Peter and the Wolfe” 153
“Wolfe Whistle” 165
“Snakes and the Fat Man: The Case of Nero Wolfe” 179
RECOMMENDED READING 183
COPYRIGHTS 189

8 thoughts on “NEARLY NERO: The Adventures of Claudius Lyon, the Man Who Would Be Wolfe By Loren D. Estleman”