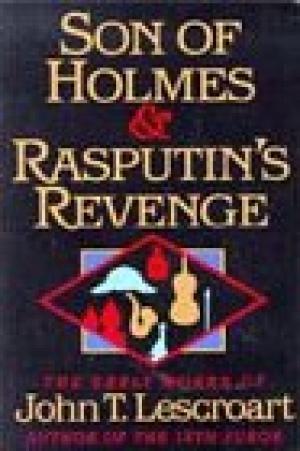 Before John Lescroat became a best selling novelist of legal thrillers like The 13th Juror, he wrote two Holmes pastiches. In Son of Holmes (1986) we meet Jules Giraud, a middle-aged spy who narrates the story. Giraud meets Auguste Lupa, child of Sherlock himself and Irene Adler. Lupa, working as a chef in a small French town, is actually a secret agent for the Allies during World War I. Together, Lupa and Giraud cooperate to solve murders that could affect the outcome of the war. I enjoyed the WWI setting and the mysteries swirling around this rural community.

Rasputin’s Revenge (1987) sends Auguste Lupa and Jules Giraud to Russia and the Court of the Czar. There they find a cunning conspiracy. Sherlock Holmes and Watson show up to assist in the unraveling of the complicated plot. If you’re in the mood for historical mysteries with a Holmes pastiche flavor, I recommend Son of Holmes & Rasputin’s Revenge. GRADE: B