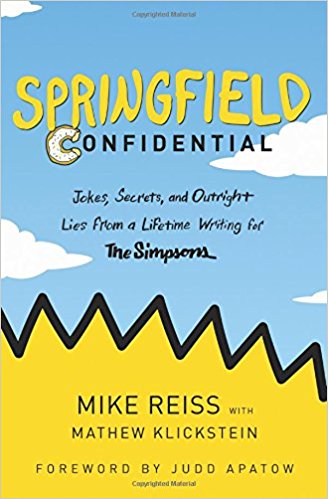 Mike Reiss worked on The Simpsons for 30 years. He was head writer during the period when The Simpsons won four Emmy Awards. Springfield Confidential is a mashup of memoir and “How To Write a Great Comedy Script.” Reiss shows how the episodes were put together: it takes 23 steps to produce a finished episode–about nine months. He shares a lot of writing tips. Reiss provides a personal history of The Simpsons with insider information–like why the Simpsons are yellow. Mike Reiss also wrote children’s books: How Murray Saved Christmas, Santa Claustrophobia, and The Boy That Looked Like Lincoln.. If you’re a fan of The Simpsons you’ll love this book! If you’re a casual watcher of the program, there’s enough humor and information here to keep you interested. Do you have a favorite episode of The Simpsons? GRADE: A
TABLE OF CONTENTS:
FORWARD by Judd Apatow xiii
Opening credits.
Burning question: Where is Springfield? — 5
Act one.
It begins … ; 9
A brief history of me ; 23
Funny for money — 37
Act two.
Meet the writers ; 51
Simpsons songs : who writes them, how are they written, and why are there so goddamn many? ; 89
Meet the showrunners ; 91
Meet the characters ; 99
Meet the cast ; 111
Burning question: Do you read what fans post on websites? ; 139
Four episodes that changed the world (kinda) ; 141
Burning question: What do you think of Family Guy? ; 161
Meet the fans ; 163
Burning question: What do you say to people who say the show has gone downhill? ; 175
Seeing the world with The Simpsons ; 177
Burning question: Why has the show lasted so long? — 191
Act three.
On comedy ; 197
How Krusty became The Critic ; 209
Burning question: What’s the biggest reason The Critic failed? ; 221
A development deal with the devil ; 223
Burning question: What is the secret of The Simpsons’ success? ; 229
Doing animated films for cash (not credit) ; 233
The sleazy, nasty world of children’s books ; 241
Gay for pay ; 247
Writing for humans again! ; 255
Back to the old tire fire — 261
The tag.
It never ends … ; 275
The final burning question: Why are the Simpsons yellow? 279
CLOSING CREDITS
Glossary 283
Answers to NPR Puzzles 289
Acknowledgements 291
Image Credits 295
About the Authors 297

13 thoughts on “SPRINGFIELD CONFIDENTIAL: JOKES, SECRETS, AND OUTRIGHT LIES FROM A LIFETIME WRITING FOR THE SIMPSONS By Mike Reiss with Mathew Klickstein”