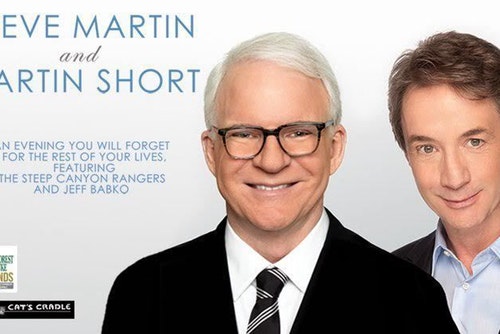 Steve Martin, Martin Short, and The Steep Canyon Rangers rolled into Buffalo for an evening of comedy and music at Shea’s Performing Arts Center. There was an “audience participation” skit based on The Three Amigos. The Steep Canyon Rangers played a song from their new Blue Grass album. My favorite part of the performance was Steve Martin’s “ventriloquist” bit where Martin Short appears as the “dummy.” Very funny. To jog memories, an overhead video showed some of the highlights of both Steve Martin and Martin Short on Saturday Night Live and scenes from their movies, too. If you’re in the mood for a couple hours of laughs, I’d recommend the Martin & Short comedy evening (aka, “Glad We Saw Them Before They’re Dead”). MARTIN SHORT: GRADE: A
STEVE MARTIN: GRADE: C