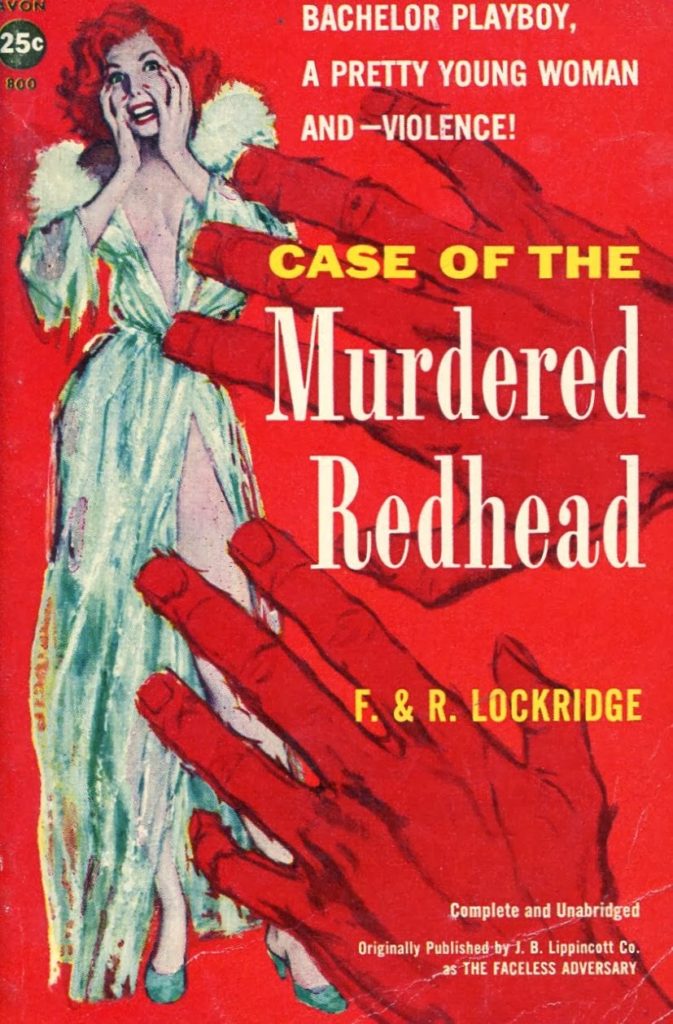 Welcome to Redhead Week! I’m starting the week’s festivities with this puzzler from the 1950s. Case of the Murdered Redhead (aka, The Faceless Adversary) is one of those incredible conspiracy novels popular back in the day. Wealthy banker John Hayward proposes to his girlfriend, Barbara Phillips, and hours later he’s charged with the murder of beautiful redhead Nora Evans–a woman Hayward has never met! Someone framed Hayward, but who? And why? Ms. Phillips believes in her fiancee’s innocence and assists Hayward as he tries to prove to the police he’s innocent. But more and more evidence piles up making the situation look dire. When another woman is murdered, the police are convinced of Hayward’s guilt. Everyone but Detective Nathan Shapiro. Shapiro sees what the other investigators miss. The Lockridges keep the suspense high in this Hitchcockian thriller. GRADE: B+
THE NATHAN SHAPIRO SERIES:
1. Case of the Murdered Redhead (aka, The Faceless Adversary) (1956)
2. Murder and Blueberry Pie (1959)
3. The Drill Is Death (1961)
4. Murder for Art’s Sake (1967)
5. Die Laughing (1969)
6. Preach No More (1971)
7. Write Murder Down (1972)
8. Or Was He Pushed? (1975)
9. A Streak of Light (1976)
10. The Old Die Young (1980)