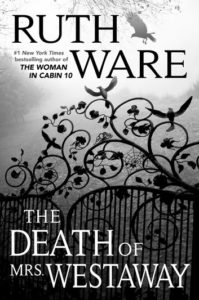 Best known for The Woman in Cabin 10, Ruth Ware writes a chilling story of secrets and identity in The Death of Mrs. Westaway. Harriet Westaway is a poor, struggling young woman who reads tarot cards. She borrowed money from a loan shark so now she’s being threatened because she can’t make the payments. Harriet receives a formal letter from a lawyer stating she’s a beneficiary in her grandmother’s will. Harriet’s grandmother died years ago, so she thinks the lawyer has her confused with the real Harriet Westaway. But, Harriet needs the money so she goes to find out what’s in the will. Then the murders start.

Ruth Ware is not Agatha Christie. I figured out what was going on fairly early in this book. I’m guessing most of you would identify the murderer. GRADE: C

18 thoughts on “THE DEATH OF MRS. WESTAWAY By Ruth Ware”