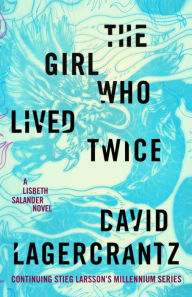 I’ve read all the Lisbeth Salander novels. Steig Larsson, for all his flaws, created an astonishing charter in the genius hacker. David Lagercrantz has continued the series after Larsson’s death, but there’s a fall-off in quality.

15 thoughts on “THE GIRL WHO LIVED TWICE: A LISBETH SALANDER NOVEL By David Lagercrantz”