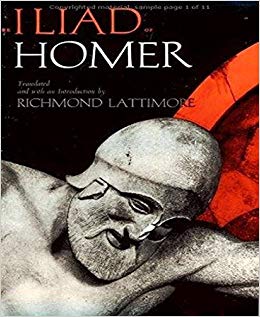 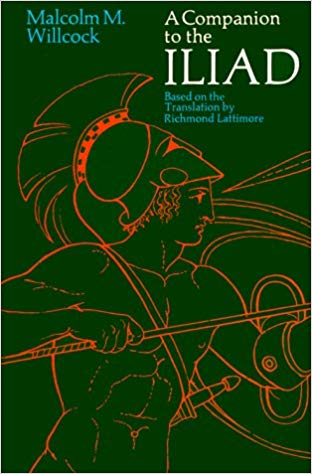 As I shelter-in-place, I figured I’d read some of the books I’ve been putting off for some time. Richmond Lattimore’s translation of Homer’s The Iliad (1951) weighs in at 517 pages. I had the Lattimore translation on my shelves for decades and I finally decided 2020 was the year to read it and the Willcock Companion volume keyed to the Lattimore translation. What better way to spend time while the coronavirus spreads across the world? I’m also including Malcolm M. Wllcock’s useful A Companion to the Iliad (1976) with its 293 pages. Many critics consider Lattimore’s translation of The Iliad to be the best. I have read several other translations of The Iliad: Robert Fagles’s 1990 translation, Stephen Mitchell’s 2011 translation, and Alexander Pope’s Iliad (it was announced in 1713 and the final volume was published in 1720).

The point that Lattimore makes in his brilliant Introduction to The Iliad of Homer is that this is a story about Achilles (the Greeks’s best fighter), not Troy. Achilles is the star although Odysseus plays a key role in the war. Most of the action revolves around Achilles and–to a lesser extent–Hector (the Trojan’s best fighter). And, of course the Greek gods play pivotal parts in the action with their choosing sides and using their powers to manipulate the proceedings. I enjoyed Lattimore’s translation. I learned a lot about Greek and Trojan weaponry from Willcock’s companion volume. And–surprise!–the Trojan Horse is never mentioned (although it is mentioned in The Odyssey). All in all, I’m glad I finally read this classic in what might be its best translation. Have you read The Iliad? What do you think of the story? GRADE: A (FOR BOTH BOOKS)

38 thoughts on “THE ILIAD OF HOMER Translated by Richmond Lattimore and A COMPANION TO THE ILIAD By Malcolm M. Willcock”