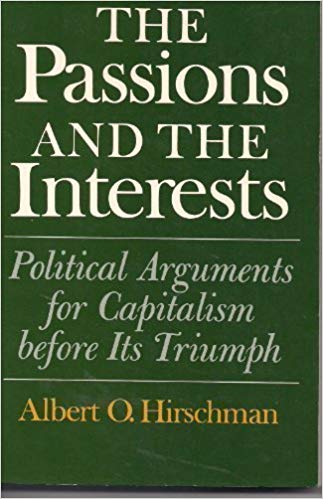 What better way to celebrate Presidents’ Day than by reading Albert O. Hirschman’s slim little book, The Passions and the Interests (1977). Hirschman quotes Alexander Hamilton on the dangers of a greedy President:

“An avaricious man, who might happen to fill the office, looking forward to the time when he must at all events yield up emoluments he enjoyed, would feel the propensity, not easy to be resisted by such a man, to take the best use of the the opportunity he enjoyed while it lasted, and might not scruple to have recourse to the most corrupt expedients to make the harvest as abundant as it was transitory…” (Number 72, The Federalist)

And Samuel Butler wrote that foolish and incapable persons in government: “have one advantage, above those who are wiser, and that of no mean importance: for no man can guess nor imagine, beforehand what course they will probably take in any business that occurs…” (p. 50)

Sound like someone we all know?
TABLE OF CONTENTS:
Acknowledgements vii
Introduction 3
PART ONE: How the Interests were Called Upon to Counteract the Passions 7
The Idea of Glory and Its Downfall 9
Man “as he really is” 12
Repressing and Harnessing the Passions 14
The Principle of the Countervailing Passion 20 “Interest” and “Interests” as Tamers of the Passions 31
Interest as a New Paradigm 42
Assets of an Interest-Governed World: Predictability and Constancy 48
Money-Making and Commerce as Innocent and Doux 56
Money-Making as a Calm Passion 63
PART TWO: How Economic Expansion was Expected to Improve the Political Order 67
Elements of a Doctrine 70
1. Montesquieu 70
2. Sir James Steuart 81
3. John Millar 87
Related yet Discordant Views 93
1. The Physiocrats 96
2. Adam Smith and the End of a Vision 100
PART THREE: Reflections on an Episode in Intellectual History 115
Where the Montesquieu-Steuart Vision Went Wrong 117
The Promise of an Interest-Governed World versus the Protestant Ethnic 128
Contemporary Notes 132
Notes 137
Index 147

13 thoughts on “THE PASSIONS AND THE INTERESTS By Albert O. Hirschman”