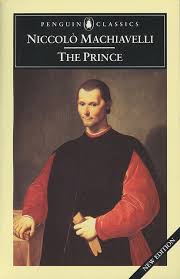 I probably have a dozen different editions of Niccolo Machiavelli’s The Prince (first English translation 1640). The book was banned by the Catholic Church who maintained The Prince was inspired by the Devil. This book (and Machiavelli’s The Discourses) actually created the area of study we now call “Political Science.” Machiavelli studies history and relates the strategies that work…and those that don’t.

Yes, The Prince is an amoral book. Machiavelli advises princes and leaders to lie and cheat under certain circumstances. He maintains that fear works better than love in ruling a populous. Religion becomes a tool for social control. You can see why the Catholic Church banned The Prince. Of all the translations of The Prince I prefer George Bull’s clear and concise version. The Prince is less than a 100 pages long, but its power has lasted centuries. It is the playbook of most governments and political leaders. If you’re interested in the hows and whys of politics, it all begins with The Prince. Have you read The Prince? GRADE: A