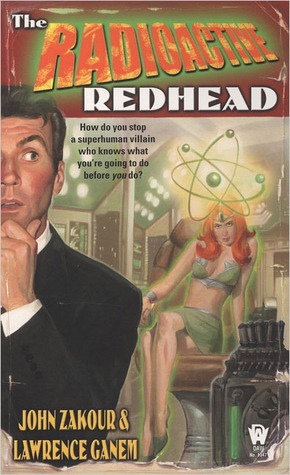 “The sultry night air of Oakland stung my face like the wet morning breath of a a lover from a seedy bar the night before: rank and unwelcome with a heavy undertone of shame. The downtown neighborhood was no doubt nearly silent at the late hour but I couldn’t be certain because my ears were overwhelmed by the terrified scream of the redhead as she clung to me.” (p. 21)

Zachary Nixon Johnson is the last Private Eye on Earth. The Radioactive Redhead kicks off with an attack on our hero by Kabuki droid assassins. Great action scene! Zach is hired to protect dazzling redhead, Sexy Sprockets, the pop-rock superstar, threatened by terrorists. Zach enlists the help of his psi assistant, Carol (also a redhead), when the case gets more complicated.

6 thoughts on “THE RADIOACTIVE REDHEAD By John Zakour & Lawrence Ganem”