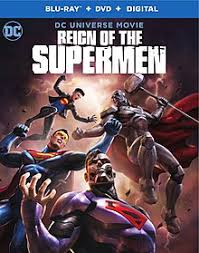 With Superman “dead,” four contenders for the Protector of Metropolis appear: unflappable Eradicator, annoying Superboy, hammer-wielding Steel, and super smart Cyborg Superman. And, of course, Lex Luthor lurks in the background. Battles between these super beings are a delight to watch! What secrets do they hide? In addition to the 87-minute animated movie, this Blu-ray edition includes Lex Luthor: The Greatest Nemsis, two Bonus Cartoons from the DC Comics Vault, and a “sneak peak” at DC’s next animated adventure: Justice League Vs. The Fatal Five. GRADE: B+

2 thoughts on “THE REIGN OF THE SUPERMEN [Blu-ray]”