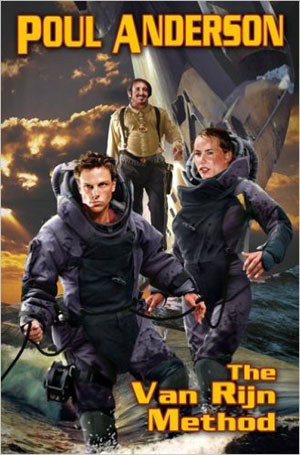 Recently, Bill Crider reviewed an upcoming Science Fiction anthology, Infinite Stars edited by Bryan Thomas Schmidt. In his review, Bill wrote this about SF Titan Poul Anderson: “And there’s a good one by Poul Anderson, now nearly forgotten but a fixture in the digests of the ’50s when I was growing up. He wrote great space opera, fantasy, hard SF, historical novels, and more, and he was good at all of them. Now virtually forgotten, more’s the pity.” Those words motivated me to read The Van Rijin Method, an omnibus edition BAEN Books published back in 2008. It’s almost 700 pages of delight! The best part of this book is The Man Who Counts (aka, The War of the Wing-Men). Classic SF!

And, this volume includes one of my favorite Poul Anderson mystery stories, “Hiding Place,” where Van Rijn has to figure out who aboard a starship carrying zoo animals are the intelligent aliens (who disguised themselves in the cages). BAEN Books published six more omnibus volumes and I’ll be reviewing them over the next few months of FFB. Do you have a favorite Poul Anderson story? GRADE: A
TABLE OF CONTENTS:
“PLANETS AND PROFITS: Introducing Nicholas Van Rijn and the Polesotechnic League” By Hank Davis

Introduction The Season Of Forgiveness
THE SEASON OF FORGIVENESS

Introduction The Man Who Counts
THE MAN WHO COUNTS