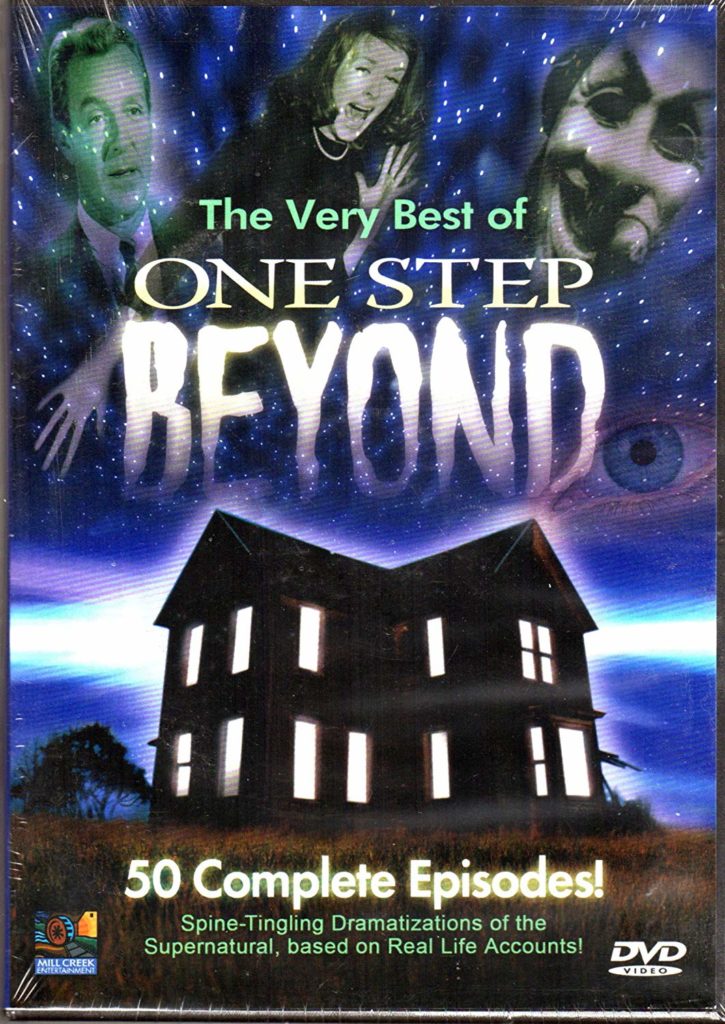 The actual title of this series was Alcoa Presents: One Step Beyond. It was an American anthology series created by Merwin Gerard. The original series was broadcast for three seasons by the American Broadcasting Company (ABC) from January 1959 to July 1961 (96 25-minute episodes). You could consider it a Poor Man’s The Twilight Zone despite its paranormal plots and claims of realism. Check out some of the soon-to-be Stars who appeared in the series:
Luana Anders (“The Burning Girl”)
John Beal (“The Lovers”)
Warren Beatty and Joan Fontaine (together in “The Visitor”)
Whit Bissell (“Brainwave”)
Robert Blake (“Gypsy”)
Charles Bronson (“The Last Round”)
Walter Burke (“The Front Runner”)
Veronica Cartwright (“The Haunting”)
Louise Fletcher (“The Open Window”
Joan Fontaine and Warren Beatty (together in “The Visitor”)
Arthur Franz (“The Call from Tomorrow”)
Ronald Howard (“The Haunting”)
Werner Klemperer (“The Haunted U-Boat”)
Robert Lansing (“The Voice”)
Cloris Leachman and Marcel Dalio (together in “The Dark Room”)
Christopher Lee (“The Sorcerer”)
Robert Loggia (“The Hand”)
Jack Lord (“Father Image”)
Patrick Macnee (“The Night of April 14th”)
John Marley (“The Night of the Kill”)
Ross Martin (“Echo”)
Patty McCormack (“Make Me Not a Witch”)
Ann McCrea (“Night of the Kill”)
Yvette Mimieux (“The Clown”)
Elizabeth Montgomery (“The Death Waltz”)
André Morell (“The Avengers”)
Patrick O’Neal (“The Return of Mitchell Campion”)
Maria Palmer (“The Secret”)
Edward Platt (“The Burning Girl”)
Donald Pleasence (“The Confession”)
Suzanne Pleshette (“Delusion”)
Paula Raymond (“Emergency Only”)
Pernell Roberts (“The Vision”)
William Schallert (“Tidal Wave” and “Epilogue”)
William Shatner (“The Promise”)
Torin Thatcher (“Doomsday”)
Yvette Vickers and Mike Connors (together in “The Aerialist”)
Robert Webber (“The Captain and His Guests”)
Peter Wyngarde (“Nightmare…”)

If you’re a fan of The Twight Zone, you might enjoy these episodes. I picked up this 4-DVD box set at a Library Sale for 50 cents. Well worth it! Have you ever seen One Step Beyond? It was shown on the SCI-FI CHANNEL in the 1990s. GRADE: B