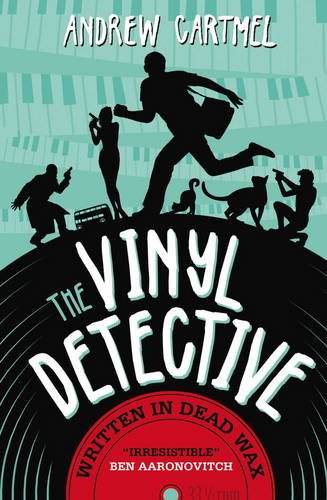 If you’re a record fan, you’re going to love Andrew Cartmel’s clever The Vinyl Detective: Written in Dead Wax. The Vinyl Detective lives in a London flat with his two cats and spends his time searching thrift shops for old record albums. He’s approached by a beautiful woman named Nevada who works for a wealthy Japanese businessman. For a considerable amount of money, the Vinyl Detective agrees to find a rare Jazz album called Easy Come, Easy Go. The search starts out as fun, but sinister forces are at work. Someone else wants the rare LP, too, and is willing to kill for it. Along the way, author Andrew Carmel displays his knowledge of popular music. Cartmel worked on Midsomer Murders and Torchwood as well as serving as a script editor on Doctor Who. I have the second Vinyl Detective mystery on top of the Read Real Soon stack so you’ll be reading that review soon. The Vinyl Detective: WRitten in Dead Wax gets the series off to a solid start. GRADE: B+

14 thoughts on “THE VINYL DETECTIVE: WRITTEN IN DEAD WAX By Andrew Cartmel”