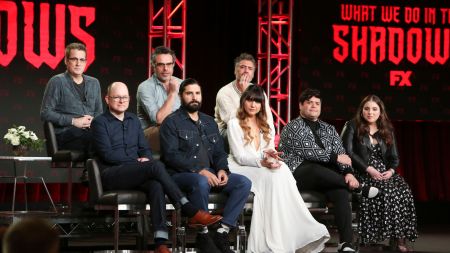 The FX Network stands above the other cable channels in innovation and risk-taking. I’m impressed with Fosse/Verdon for drama and now What We Do In the Shadows for comedy. What We Do In the Shadows is based on the 2014 movie of the same name conceived by Jemaine Clement and Taika Waititi. This new incarnation presents a mock-documentary that follows a group of vampires who live together in Staten Island, NY.

The leader of the vampire group is “Nandor The Relentless” (played by Kayvan Novak). Nandor was a great warrior and conqueror from the Ottoman Empire. He leads this group despite the fact that his Old World thinking results in comic situations. British vampire “Laszlo” (played by Matt Berry) is a pretentious rogue. Laszlo loves chaos and generates much of the comedy in What We Do In the Shadows. “Nadja” (played by Natasia Demetriou) is my favorite character. Nadja is a seductive vampire who is smarter than Nandor and Laszlo combined.

Also living in the vampire household is “Guillermo” (played by Harvey Guillén), Nandor’s familiar (a servant/protector of a vampire during the daylight hours). Guillermo yearns to be made a real vampire just like his master. But, Nandor is reluctant to grant that wish. The odd “Colin Robinson” (played by Mark Proksch) is an energy vampire. He can survive in daylight and feasts on human energy–not on their blood like the other vampires. “Jenna” (played by Beanie Feldstein) is a student at a nearby community college. Nadja turns Jenna into a vampire and watching the transformation is both horrifying and humorous!

Yes, there’s plenty of silly stuff in What We Do In the Dark, but I found this 10-episode series refreshingly funny. It’s been renewed for a Second Season. GRADE: A-.

14 thoughts on “WHAT WE DO IN THE SHADOWS: SEASON ONE FINALE (FX)”