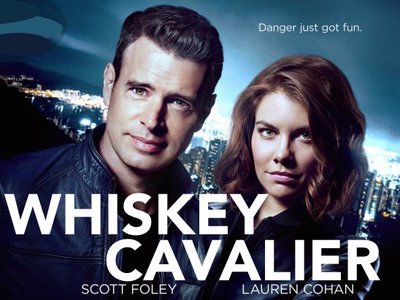 Most “Mid-Season” network TV series suck. But ABC’s “action comedy drama” (their description, not mine!), Whiskey Cavalier, provides some low-level entertainment during the dismal Winter weeks. Here’s ABC’s official representation of Whiskey Cavalier: “Whiskey Cavalier follows the adventures of FBI agent Will Chase (codename: Whiskey Cavalier) who, following an emotional break-up with his girl friend, is assigned to work with CIA operative, Francesca ‘Frankie’ Trowbridge (codename: Fiery Tribune). Together, they lead an inter-agency team of spies who periodically save the world (and each other) while navigating the rocky roads of friendship, romance, and office politics.”

Think of Whiskey Cavalier as a mashup of Remington Steele and Mission Impossible. An FBI agent (Scott Foley) working with a CIA operative (Lauren Cohan) is a situation bound to cause conflict (it does). In addition, the “Team” includes a FBI profiler (Anna Ortiz played by Shannon Sampson), a computer hacker (Tyler James Williams played by Edgar Standish), and a fixer (Vir Das played by Jai Datta).

There’s so little on network TV worth watching that Whiskey Cavalier scores an 85% on ROTTEN TOMATOES. If you set the bar low, you might enjoy this fluffy series. GRADE: C+