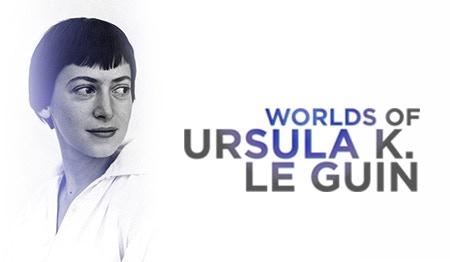 I first read Ursula K. Le Guin’s The Left Hand of Darkness in 1969. Le Guin’s novel is set on a planet where the aliens change sex on a monthly basis: ambisexual. A Terran human, Genly Ai, is sent to the planet of Gethen as an envoy of the Ekumen, a confederation of planets. Ai’s mission is to persuade the nations of Gethen to join the Ekumen, but difficulties block his success. At the time, Le Guin’s gender-bending aliens–who might be female one month and a male the next–shocked and delighted many Science Fiction readers. The Left Hand of Darkness won both the Hugo and Nebula Awards for Best Novel of the Year. Le Guin’s next success was The Dispossessed: An Ambiguous Utopia, a 1974 SF novel about social structures on a remote planet. It won a Nebula for Best Novel of the Year.

Yet, Worlds of Ursula K. Le Guin spends a lot of time on Le Guin’s 1968 fantasy novel, A Wizard of Eathsea and its sequels. As the promo says: “Directed by documentarian Arwen Curry, Worlds of Ursula K. Le Guin includes a decade of filming with Le Guin herself, who died in 2018, and interviews with her science fiction and fantasy contemporaries and pupils, including Margaret Atwood, Samuel R. Delany, Annalee Newitz, China Miéville, Neil Gaiman, Michael Chabon and David Mitchell.” You’ll even see a brief glimpse of Jeff Smith’s fanzine that Le Guin contributed to. If you are a fan of Ursula K. Le Guin’s work, you’ll love this documentary!

In sixty years of writing, Ursula K. Le Guin produced 21 novels, several essay collections, children’s books, poetry, and 11 volumes of short stories. The Library of America is issuing her work in their marvelous bound volumes. And, 2019 is the 50th anniversary of Le Guin’s best science fiction novel (in my opinion), The Left Hand of Darkness. Are you a fan of Ursula K. Le Guin’s work? GRADE: A