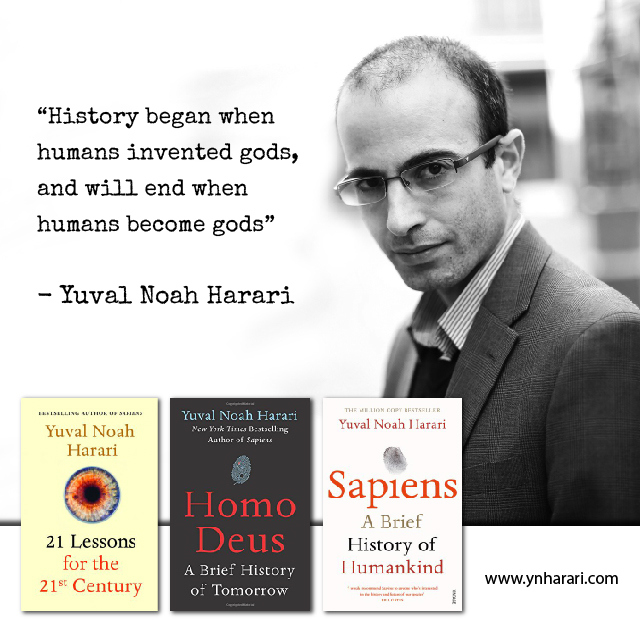 “I am aware that many people might be upset by my equating religion with fake news, but that’s exactly the point. When a thousand people believe some made-up story for one month, that’s fake news. When a billion people believe it for a thousand years, that’s a religion…” (p. 239) Yuval Noah Narari peeks into the Future and reports his findings in 21 Lessons for the 21st Century. I was most interested in Harari’s speculations about Artificial Intelligence and robots completely changing the workplace. And I concur with Harari’s assertion that Education in the Future would consist of “the 4 C’s”: critical thinking, communication, collaboration, and creativity (p. 266).

I used to teach a class in Advertising at my College. Imagine my reaction to reading this: “What will happen once we can say to GOOGLE, ‘Hi, GOOGLE. Based on everything you know about cars, and based on everything you know about me (including my needs, my habits, my views on global warming, and even my opinion about Middle Eastern politics), what is the best car for me?’ If GOOGLE can give us a good answer to that, and if we learn by experience to trust GOOGLE’s wisdom instead of our own easily manipulated feelings, what could possibly be the use of car advertisements?” Exactly! This scenario is the death of Advertising as we know it.

There’s plenty to think about in 21 Lessons For the 21st Century. You’ll be pondering the implications for months! GRADE: A

TABLE OF CONTENTS:
INTRODUCTION xiii
Part I: The Technological Challenge
1. DISILLUSIONMENT The end of history has been postponed 3
2. WORK When you grow up, you might not have a job 19
3. LIBERTY Big Data is watching you 44
4. EQUALITY Those who own the data own the future 73

Part II: The Political Challenge
5. COMMUNITY Humans have bodies 85
6. CIVILISATION There is just one civilisation in the world 93
7. NATIONALISM Global problems need global answers 110
8. RELIGION God now serves the nation 127
9. IMMIGRATION Some cultures might be better than others 140