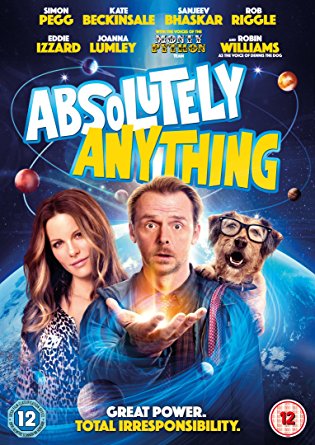 I enjoyed Simon Pegg’s Man Up (Patti Abbott recommended it, my review is here). But Absolutely Anything is a completely different movie. A band of space aliens called the Galactic Council have to decide whether to destroy Humanity or allow it to develop (the aliens are voiced by the MONTY PYTHON team of John Cleese, Terry Gilliam, Eric Idle, Terry Jones, amd Michael Palin). They have a “test” that allows how their decision should be made. The aliens choose one Earthly at random and give them the power to do absolutely anything.

Simon Pegg, a struggling teacher, discovers he suddenly has amazing powers. Simon is in love with Catherine West (Kate Beckinsale) who is struggling with her job at the BBC. Simon tries to win Catherine’s love by using his new powers, but he only messes things up. Simon also gives his dog, Dennis, the power to speak. The voice of Dennis is Robin Williams. This was Robin Williams’s last film role.

There’s a lot of silliness in Absolutely Anything. Kate Beckinsale is the best thing about this occasionally comic movie. But, set the bar low. GRADE: C+

11 thoughts on “ABSOLUTELY ANYTHING [DVD]”