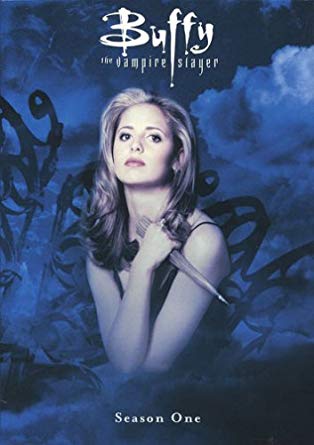 Buffy Summers (Sarah Michelle Gellar), who looks a high-school student, is actually a young woman with superhuman strength. Buffy is the “Chosen One,” and her mission is to rid the world of Evil, mostly by killing demons and vampires. Pretty heady stuff for a teenager!

I bought this DVD set for a dollar at a recent Library Book Sale. Obviously they were selling more than books (I picked up a bag of CDs, too!).

The First Season of Buffy the Vampire Slayer, set mostly in Sunnydale High School. Buffy and her mother moved to Sunnydale after Buffy unfortunately torched her previous High School’s gym. We’re introduced to the other characters that assist Buffy in her fight against the Undead. The “Watcher” Giles (Anthony Stewart Head) provides essential information for Buffy’s battles. There’s a friendly geek called Xander (Nicholas Brendon), a computer nerd called Willow (Alyson Hannigan) who would blossom in upcoming Seasons, and snarky socialite called Cordelia (Charisma Carpenter). They all aid Buffy in her quest in various unusual ways.

Did you watch Buffy the Vampire Slayer on The WB back in 1997? Were you a fan? GRADE: A