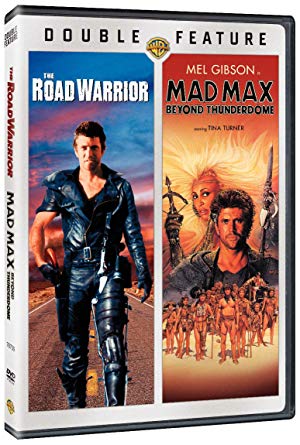 Here’s another bargain ($1.00!) from that Library Book Sale I attended over the weekend: a Double Feature of social collapse (perhaps anticipating what will happen if Trump wins a Second Term). The Road Warrior is an Australian film directed by George Miller that is set in a Post-Apocalypse world where everyone is fighting for scarce resources like gasoline…and food. A small community of survivors is attacked by a thuggish gang. Mad Max (aka, Mel Gibson) uses his fighting skills and strategy to help them defend their outpost. I liked this movie back in 1981 and I like it today. GRADE: A

I’m less enthusiastic about Mad Max Beyond Thunderdome which showed up in the U.S. in 1985. Despite the astonishing performance of Tina Turner in this film, I thought the gladiatorial battle sequences became tiresome. GRADE: B

Are you a fan of the Mad Max movies? Do you have a favorite?