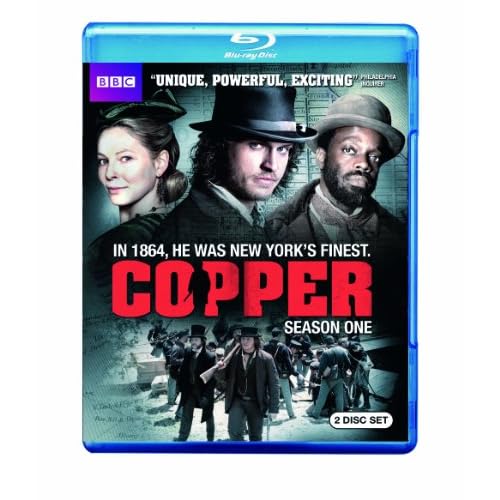 Few TV dramas have given me so much pleasure as watching Copper on BBC America this Fall. Tom Fontana (St. Elsewhere, Homicide, OZ, is one of the producers and writers of BBC America’s first original scripted series. Copper is set in 1860s New York City. The 10-part drama centers on Kevin Corcoran (Tom Weston-Jones), an intelligent but ruthless Irish-American cop working the city’s notorious Five Points neighborhood. Corcoran is obsessed to learn the truth about the disappearance of his wife and the death of his daughter while he was fighting in the Civil War. Tom Fontana provides a compelling story arc the builds suspense. The cast is excellent. Other story-lines concern a young girl named Annie who was sexually abused. There’s also a Confederate conspiracy to burn down New York City. Plenty of plot twists and turns pop up in this fine series. If you missed it, BBC America will be rebroadcasting the series. Or, you can obtain this great Blu-ray set that goes on sale tomorrow. GRADE: A

6 thoughts on “COPPER SEASON ONE [Blu-ray]”