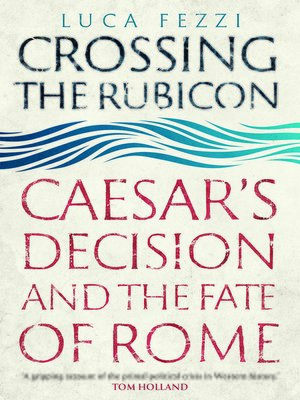 Although it was not yet ten years that he had been fighting in Gaul, he captured more than 800 cities, subjugated 300 nations, fought 3 million men at different times, killed 1 million of them in battle and took as many prisoners. (Plutarch, Caesar, 15.5)

Crossing the Rubicon: Caesar’s Decision and the Fate of Rome by Luca Fezzi (translated from the Italian by Richard Dixon) presents a tale of ambition and politics and civil war. Caesar decides to challenge Proconsul Pompey and ignores the Roman Senate’s command to disband his troops. Caesar crosses the Rubicon and risks everything to become the most powerful man in the Roman Empire. Luca Fezzi’s writing style, far from academic, tells the thrilling story of a brilliant general with much higher aspirations.

On top of the great story, Crossing the Rubicon explores how to manage risks, how to make decisions (Pompey made some major gaffes), and when to gamble…and when not to. I found Crossing the Rubicon a revealing history and a useful guide. Have you been to Italy? GRADE: A
TABLE OF CONTENTS:
List of Maps vii
A Note on the Text viii
Translator’s Note ix
A Note on Source x
Prologue xvi
Part I Background
1 The Stage and Its Main Characters 3
2 Plots and Scandals 39
3 The Arrival of the ‘First Triumvirate’ 53
4 Caesar, Gaul and Rome 67
Part II Rome In Chaos
5 From the Death of Clodius to a Sole Consul 89
6 Winner in a Tight Corner 107
7 Winds of Civil War 127
Part III From The Rubicon To The Surrender of Rome
8 The Rubicon 149
9 The Escape from Rome 166
10 Caesar’s ‘Long March’ and Pompey’s Flight to Brundisium 194
11 In Caesar’s Hands 224
12 The Battle Fought, the Res Publica, and the City 245
Glossary 279
Chapter Notes 285
Bibliography and Further Notes 301
Acknowledgements 330
Index 331

14 thoughts on “CROSSING THE RUBICON: CAESAR’S DECISION AND THE FATE OF ROME By Luca Fezzi”