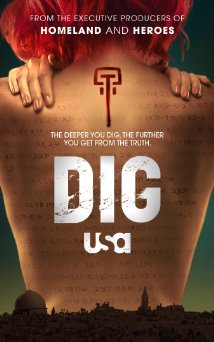 If you put 24 and The Di Vinci Code in a blender, you’d get something like Dig. I watched the first episode last week and like most critics I wondered, “What the hell is going on?” Several plots are swirling around. FBI agent Peter Connelly, played by a wooden Jason Isaacs (he played Lucius Malfoy in the HARRY POTTER movies with more energy) , is sleeping with his boss (Ann Heche–what does she see in him?), and almost has sex with a redheaded college student who is subsequently murdered (what did she see in him?). There seems to be a plot by a Jewish cult that involves a young boy who must be “pure” in order to bring about…something. I’m guessing the Apocalypse. Dig was created by Homeland executive producer Gideon Raff and Heroes creator Tim Kring. Hopefully the confusion clears up or Dig will lose a lot of its audience fast.