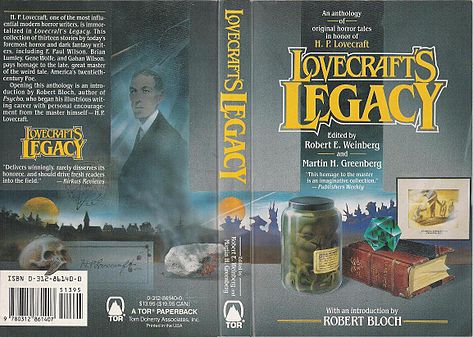 Last year a dozen faux-Lovecraft anthologies were published. But it all started in 1990 with Lovecraft’s Legacy edited by Robert E. Weinberg and Martin H. Greenberg. Robert Block’s informative Introduction puts Lovecraft into perspective. Each of the writers in this collection includes a short note at the end of their stories where they tell how they first encountered Lovecraft’s work and which story most affected them. My favorite story in Lovecraft’s Legacy is F. Paul Wilson’s “The Barrens.” If you’re a fan of Lovecraft, you’ll really enjoy these stories.
TABLE OF CONTENTS:
Introduction: An Open Letter to H. P. Lovecraft By Robert Bloch
A Secret of the Heart By Mort Castle 1
The Other Man By Ray Carton 33
Will By Graham Masterton 53
Big C By Brian Lumley 71
Ugly By Gary Brandner 97
The Blade and the Claw By Hugh B Cave 109
Soul Keeper By Joseph A Citro 142
From the Papers of Helmut Hecker By Chet Williamson 159
Meryphillia By Brian McNaughton 173
Lord of the Land By Gene Wolfe 190
H P L By Gahan Wilson 211
The Order of Things Unknown By Ed Gorman 251
The Barrens By F Paul Wilson 269