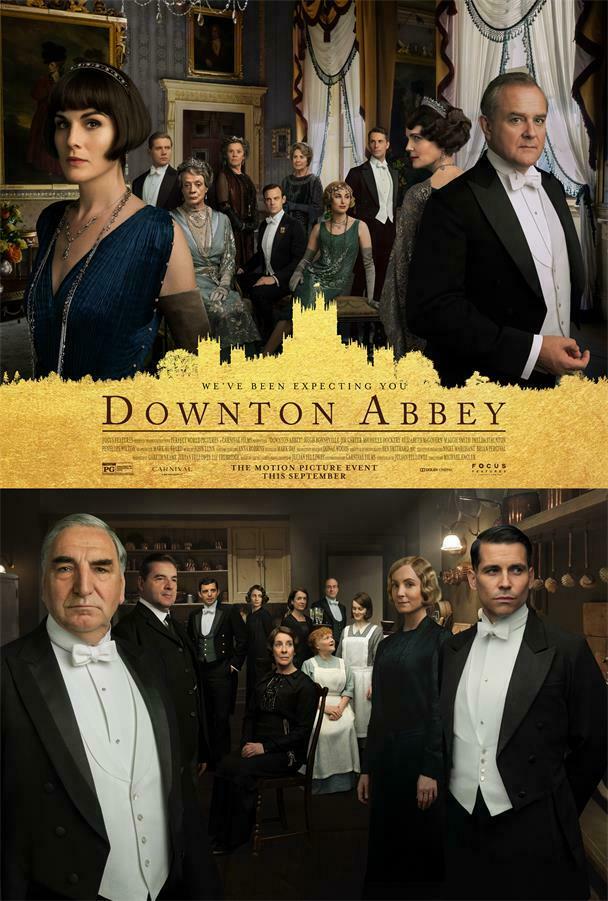 In the sold-out AMC theater where we viewed Downton Abbey: The Movie, the audience clapped and cheered when the film ended. Several of the audience dressed up as their favorite characters–hats, long dresses, etc.–which gave the movie opening a Star Wars or Harry Potter event feel. The elegant costumes, the stately mansions, the cool 1920s vehicles filmed by Ben Smithard look plush and posh. Maggie Smith, Hugh Bonneville, Michelle Dockery, and Elizabeth McGovern return to lead the action at Downton Abbey when King George V and Queen Mary announce they’re going to visit Yorkshire and spend a day or two with the Granthams. This Royal announcement sends the staff of Downton Abbey into a tizzy. Lady Mary brings retired butler, Carson, out of retirement to help prepare for the Royal visit.

To prepare for Downton Abbey: The Movie Diane and I binged on all 52 hours of the PBS series. It took us two weeks of nightly viewing. The back-stories of the dozen or so re-accuring characters of this drama series enriches the movie experience. Director Michael Engler plunges right into the Royal shenanigans so viewers with little or no knowledge of the TV series may be a bit lost as events unfold. Series creator Julian Fellowes provides a screenplay that gives all the major characters some key moments. If you’re a fan of Downton Abbey, this movie version is a must-see. If you’re a fan of Upstairs Downstairs you might enjoy this clone series and movie. GRADE: B

22 thoughts on “DOWNTON ABBEY: THE MOVIE”