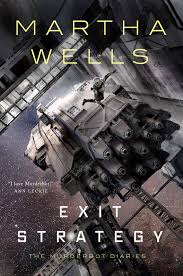 Martha Wells won a Hugo Award for Best Novella for All Systems Red, the first book in the Murderbot series. Exit Strategy, the just published fourth book in the Murderbot series, brings the story arc back to the its beginnings. Murderbot is a rogue SecUnit who hacked his governor module and freed himself from corporate control. But now, Murderbot is on the run as the knowledge he’s gained triggers violence. Dr. Mensah, Murderbot’s key client, has been kidnapped by the evil GrayCris Corporation who is reeling from disclosures of its illegal secret alien technology project. Murderbot decides to help the forces that are attempting to rescue Dr. Mensah.

Unlike the earlier books in this series, All Systems Red (review here), Artificial Condition (review here), and Rogue Protocol (review here) readers who don’t know the back story of the Murderbot are likely to be lost and confused by Exit Strategy. Martha Wells tries to supply necessary information at key points in the story, but there’s a lot going on in a 172 pages.