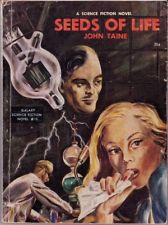 Seeds of Life is the last of those Galaxy Science Fiction Novels I found in my basement this summer. “John Taine” is the pseudonym of Eric Temple Bell, a mathematician and scientist. Seeds of Life is a variation on the Jekyll and Hyde theme. A technical assistant is zapped by radiation in a laboratory and is transformed into genius. Initially, the genius builds incredible devices that make millions of dollars. But the genius goes to the Dark Side and his evil threatens to unleash new horrors on the United States. Written in 1931, Seeds of Life has some of the stilted prose of that era. But even 80 years ago, John Taine was suggesting that radiation could have devastating mutating effects. Science shows up in Erie Temple Bell’s other “John Taine” science fiction novels. The best known were published in an omnibus edition by Dover Press: The Time Stream; The Greatest Adventure; and The Purple Sapphire. If you’re in the mood for some Old School SF adventures, these John Taine novels fit the bill.