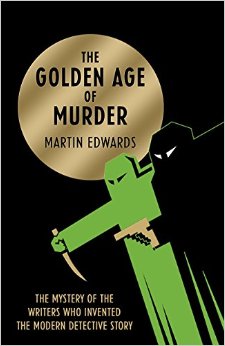 Martin Edwards’ marvelous The Golden Age of Murder: The Mystery of the Writers Who Invented the Modern Detective Story presents a fascinating cast of characters. Dorothy Sayers, Agatha Christie, Anthony Berkeley, G. K. Chesterton, Gladys Mitchell, Margery Allingham, John Dickson Carr, Christianna Brand, Michael Innes, and a dozen more now obscure mystery writers were members of the Detection Club. Edwards weaves the aspects of their individual stories around the activities of the Club. I had no idea these writers were so quirky! I wanted to drop everything and read some Anthony Berkeley when I learned how snarky he was. The Golden Age of Murder will energize readers and trigger a renewed interest in Golden Age detective novels. And, The Golden Age of Murder should win every mystery award in sight! Don’t miss this extraordinary book!
TABLE OF CONTENTS:
Introduction
Members of the Detection Club elected 1930-49
Part One: The Unusual Suspects
The Ritual in the Dark
A Bitter Sin
Conversations about a Hanged Woman
The Mystery of the Silent Pool
A Bolshevik Soul in a Fabian Muzzle
Wearing Their Criminological Spurs
The Art of Self-Tormenting
Part Two: The Rules of the Game
Setting a Good Example to the Mafia
The Fungus-Story and the Meaning of Life
Wistful Plans for Killing Off Wives
The Least Likely Person
The Best Advertisement in the World
Part Three: Looking to Escape
“Human Life’s the Cheapest Thing There Is”
Echoes of War
Murder, Transvestism and Suicide During a Trapeze Act
A Severed Head in a Fish-Bag
“Have You Heard of Sexual Perversions?”
Clearning Up the Mess
What It Means to Be Stuck for Money
Neglecting Demosthenes in Favour of Freud
Part Four: Taking on the Police
Playing Games with Scotland Yard
Why was the Shift Put in the Boiler-Hole?
Trent’s Very Last Case
A Coffin Entombed in a Crypt of Granite
Part Five: Justifying Murder
Knives Engraved with ‘Blood and Honour’
Touching with a Fingertip the Fringe of the Great Events
Collecting Murderers
No Judge or Jury but My Own Conscience
Part Six: The End Game
Playing the Grandest Game in the World
The Work of a Pestilential Creature
Frank to the Point of Indecency
Shocked by the Brethren
Part Seven: Unraveling the Mysteries
Murder Goes One Forever
Appendices
Constitution and Rules of the Detectives Club
Bibliography
Index
Index of Titles

16 thoughts on “FORGOTTEN BOOKS #326: THE GOLDEN AGE OF MURDER By Martin Edwards”