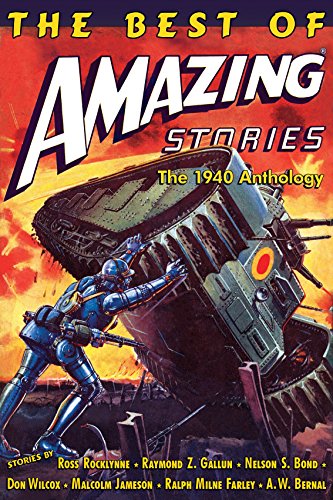 The Best of Amazing Stories: The 1940 Anthology features a great mix of tales by Ross Ricklynne, Raymond Z. Gallun, Don Wilcox, Ralph Milne Farley, and other forgotten writers. I remember reading some AMAZING STORIES pulps from the Forties as a kid. Great fun! This anthology shows all the 12 covers from the entire year of 1940 on the back cover. Nice feature! If you’re in the mood for some retro Science Fiction of World War II vintage, this package is perfect for you for a mere $12.99 on AMAZON! GRADE: A
TABLE OF CONTENTS:
Publisher’s Note
Introduction
“The Voyage That Lasted 600 Years” by Don Wilcox
“The Monster Out of Space” by Malcolm Jameson
“Truth is a Plague!” by David Wright O’Brien
“Paul Revere and the Time Machine” by A. W. Bernal
“The Living Mist” by Ralph Milne Farley
“The Day Time Stopped Moving” by Bradner Buckner
“The Mathematical Kid” by Ross Rocklynne
“The Strange Voyage of Dr. Penwing” by Riichard O. Lewis
“Three Wise Men of Space” by Donald Bern
“Sons of the Deluge” by Nelson S. Bond

27 thoughts on “FORGOTTEN BOOKS #385: THE BEST OF AMAZING STORIES”