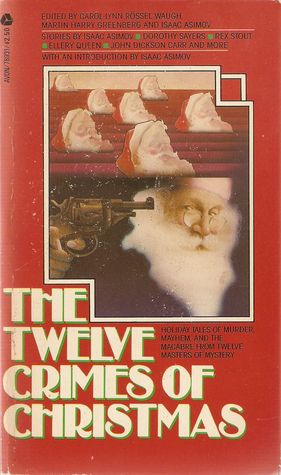 I’ve been a fan of the Waugh, Greenberg, and Asimov anthologies. This Avon paperback appeared in 1981. I liked Ellery Queen’s “The Dauphin’s Doll,” Edward D. Hoch’s “The Problem of the Church Steeple,” Stanley Ellin’s “Death of Christmas Eve,” and August Derleth’s “The Adventure of the Unique Dickensians.” If you’re looking for mystery stories to put you in the Christmas spirit, I recommend The Twelve Crimes of Christmas. GRADE: A-
TABLE OF CONTENTS:
INTRODUCTION: Noel, Noel! by Isaac Asimov
CHRISTMAS PARTY by Rex Stout
DO YOUR CHRISTMAS SHOPLIFTING EARLY by Robert Somerlott
THE NECKLACE OF PEARLS by Dorothy L. Sayers
CELEBRATES CHRISTMAS by Alice Scanlan Reach
THE CHRISTMAS MASQUE by S. S. Rafferty
THE DAUPHIN’S DOLL by Ellery Queen
BY THE CHIMNEY WITH CARE by Nick O’Donohoe
THE PROBLEM OF THE CHRISTMAS STEEPLE by Edward D. Hoch
DEATH ON CHRISTMAS EVE by Stanley Ellin
THE ADVENTURE OF THE UNIQUE DICKENSIANS by August Derleth
BLIND MAN’S HOOD by John Dickson Carr
THE THIRTEENTH DAY OF CHRISTMAS by Isaac Asimov