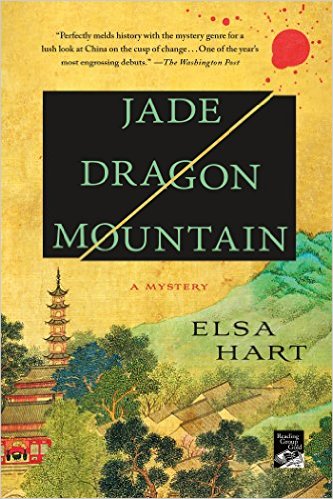 If you’re a fan of Robert van Gulik’s Judge Dee mysteries, you’ll enjoy Elsa Hart’s Jade Dragon Mountain. An itinerant scholar, Li Du, arrives in a village just a week before the Emperor of China is due to visit. Li Du talks to a Jesuit astronomer about the upcoming eclipse. Li Du also hears an argument between the Jesuit and an East India Company merchant. Shortly thereafter, Li Du finds the body of the murdered Jesuit. The magistrate asked Li Du to investigate the crime and he uncovers many secrets. As the day of the Emperor’s arrival approaches, the tension increases as plots abound. If you enjoy twisty plots, political intrigue, and red herrings, Jade Dragon Mountain is the mystery for you! I hope Elsa Hart writes another mystery featuring the brainy Li Du! GRADE: B