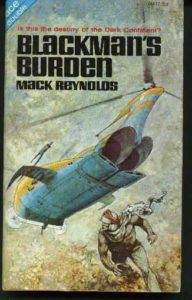 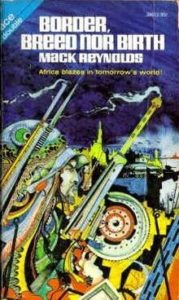 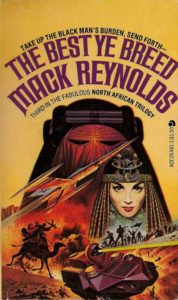 In 1972, I read Mack Reynold’s Black Man’s Burden/Border, Breed Nor Birth, a cool looking ACE Double. I discovered the stories were reprinted from ANALOG and written a decade earlier. Yes, there are some politically incorrect aspects to these stories of a group of African-Americans who decide to unite North African countries by creating a mythical leader, El Hassan, to bring progress to suffering people. In the Introduction to “Black Sheep Astray” Mack Reynolds writes that John Campbell, editor of ANALOG , suggested elements of the series.

Later, I learned there was another book in the North Africa Series, The Best Ye Breed, where the Soviets, Japanese and Americans decide El Hassan must be assassinated because he and his group controls too many vital natural resources. Mack Reynolds may have come up with this idea because of the OPEC oil crisis at the time. Nation-building isn’t a common Science Fiction theme, but Mack Reynolds–a SF writer who wrote about politics and economics–delivers a thought-provoking series. GRADE: B+