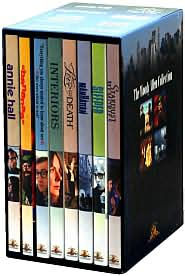 While organizing my books, CDs, and DVDs, I stumbled over The Woody Allen Collection. It was in a box of other stuff, unopened. I obviously bought it years ago and forgot all about it. Immediately I was seized by the impulse to binge on these movies. Here’s what I watched:
A Midsummer Night’s Sex Comedy (1982)
Zelig (1983)
Broadway Danny Rose (1984)
The Purple Rose of Cairo (1985)
Hannah and Her Sisters (1986)
Radio Days (1987)

I hadn’t seen these films since I first saw them back in the 1980s. These were Woody’s Mia Farrow years. He gave Mia a wide range of roles from the tough-as-nails Tina in Broadway Danny Rose to the sweet and innocent Cecilia in The Purple Rose of Cairo to ditzy Sally White in Radio Days where she gets to sing (so does Diane Keaton). Do you have a favorite among these films? GRADE: B+