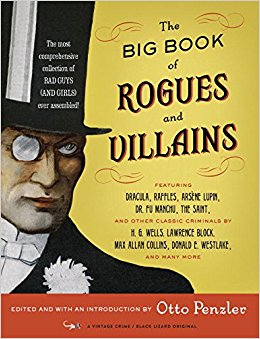 I’m a fan of Otto Penzler’s anthologies. This latest tome, 911 pages, includes 72 short stories of every imaginable type. Penzler presents these stories in a rough chronological order. As usual, Penzler chooses some obscure stories by some even more obscure authors. I prefer the more modern stories, but almost every taste in crime fiction is represented here. I enjoyed Otto Penzler’s informative Introduction. If you’re looking for a big stocking stuffer, look no farther than The Big Book of Rogues and Villains. GRADE: A
TABLE OF CONTENTS:
Introduction by Otto Penzler
THE VICTORIANS
At the Edge of the Crater by L. T. Meade & Robert Eustace
The Episode of the Mexican Seer by Grant Allen
The Body Snatcher by Robert Louis Stevenson
Dracula’s Guest by Bram Stoker
The Narrative of Mr. James Rigby by Arthur Morrison
The Ides of March by E. W. Hornung

19TH CENTURY AMERICANS
The Story of a Young Robber by Washington Irving
Moon-Face by Jack London
The Shadow of Quong Lung by C. W. Doyle

THE EDWARDIANS
The Fire of London by Arnold Bennett
Madame Sara by L. T. Meade & Robert Eustace
The Affair of the Man Who Called Himself Hamilton Cleek by Thomas W. Hanshew
The Mysterious Railway Passenger by Maurice Leblan
An Unposted Letter by Newton MacTavish
The Adventure of “The Brain” by Bertram Atkey
The Kailyard Novel by Clifford Ashdown
The Parole of Gevil-Hay by K. & Hesketh Prichard
The Hammerspond Park Burglary by H. G. Wells
The Zayat Kiss by Sax Rohmer

EARLY 20TH CENTURY AMERICANS
The Infallible Godahl by Frederick Irving Anderson
The Caballero’s Way by O. Henry
Conscience in Art by O. Henry
The Unpublishable Memoirs by A. S. W. Rosenbach
The Universal Covered Carpet Tack Company by George Randolph Chester
Boston Blackie’s Code by Jack Boyle
The Gray Seal by Frank L. Packard
The Dignity of Honest Labor by Percival Pollard
The Eyes of the Countess Gerda by May Edginton
The Willow Walk by Sinclair Lewis
A Retrieved Reformation by O. Henry

BETWEEN THE WORLD WARS
The Burglar by John Russell
Portrait of a Murderer by Q. Patrick
Karmesin and the Big Flea by Gerald Kersh
The Very Raffles-Like Episode of Castor and Pollux, Diamonds De Luxe by Harry Stephen Keeler
The Most Dangerous Game by Richard Connell
Four Square Jane by Edgar Wallace
A Fortune in Tin by Edgar Wallace
The Genuine Old Master by David Durham
The Colonel Gives a Party by Everett Rhodes Castle
Footsteps of Fear by Vincent Starrett
The Signed Masterpieces by Frederick Irving Anderson
The Hands of Mr. Ottermole by Thomas Burke
“His Lady” to the Rescue by Bruce Graeme
On Getting an Introduction by Edgar Wallace
The 15 Murderers by Ben Hecht
The Damsel in Distress by Leslie Charteris

THE PULP ERA
After-Dinner Story by William Irish
The Mystery of the Golden Skull by Donald E. Keyhoe
We Are All Dead by Bruno Fischer
Horror Insured by Paul Ernst
A Shock for the Countess by C. S. Montanye
A Shabby Millionaire by Christopher B. Booth
Crimson Shackles by Frederick C. Davis
The Adventure of the Voodoo Moon by Eugene Thomas
The Copper Bowl by George Fielding Eliot

THE MODERNS
The Ehrengraf Experience by Lawrence Block
Quarry’s Luck by Max Allan Collins
The Partnership by David Morrell
Blackburn Sins by Bradley Denton
The Black Spot by Loren D. Estleman
Car Trouble by Jas A. Petrin
Keller on the Spot by Lawrence Block
Boudin Noir by R. T. Lawton
Like a Thief in the Night by Lawrence Block
Too Many Crooks by Donald E. Westlake

14 thoughts on “FORGOTTEN BOOKS #450: THE BIG BOOK OF ROGUES AND VILLAINS Edited by Otto Penzler”