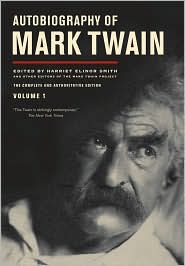 In a moment of marketing genius, Mark Twain declared that his Autobiography not be published until a 100 years after his death. Twain died in 1910. Now we have Volume One of Twain’s rambling reminiscences: all 760 pages. Twain decided that the best way to create his Autobiography was to walk around telling stories and having a stenographer follow him around taking down every word Twain spoke. The result is very much like a blog: subject follows subject almost randomly. Yes, there are some tedious passages, as you might expect in a book this large. But Twain’s humor and wit appear on almost every page. I’ll be waiting eagerly for the next two volumes (1200 pages!). If you’re a Mark Twain fan, the 100 year wait is over!

14 thoughts on “FORGOTTEN BOOKS #90: THE AUTOBIOGRAPHY OF MARK TWAIN, VOLUME ONE”