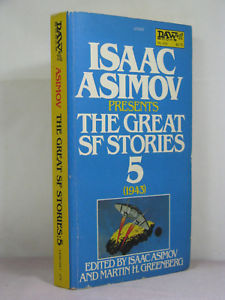 The Great SF Stories #5 features FIVE stories by Henry Kuttner & C. L. Moore. “Mimsy Were the Borogroves” (adapted as the movie “The Last Mimsy” in 2007) is one of the classic SF stories from this period. But my favorite story in this anthology is “The Proud Robot.” This is one of the “Galloway Gallegher” stories that Kuttner and Moore wrote that were later collected in Robots Have No Tails. Gallegher is a genius, but does his best work when he’s very, very drunk (not politically correct today). When Gallegher wakes up from one of his binges, he finds incredible technology that he invented “under the influence”–but he has no idea how it works or what it does. I love these clever tales and “The Proud Robot” is one of the best stories in the series.