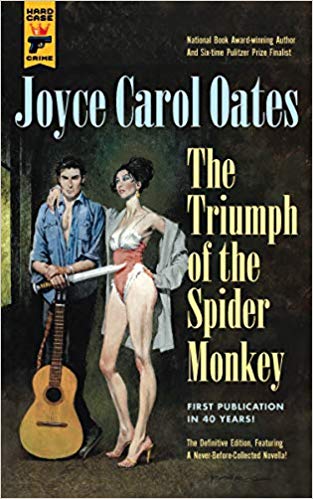 Joyce Carol Oates is a yearly contender for the Nobel Prize for Literature. Oates, writing at a high level over 50 years, produced an impressive body of work (although Oates occasionally gets criticized for writing “too much”). Oates has written crime novels under her “Rosamond Smith” pseudonym and psychological suspense novels under her “Lauren Kelly” pseudonym. HARD CASE CRIME’s publication of The Triumph of the Spider Monkey is the first definitive edition of the book that was published 40 years ago.

The Triumph of the Spider Monkey enters the mind of mentally disturbed Bobbie Gotteson. Bobbie was found abandoned in a bus station locker and grew up moving from one foster home to another, from one detention center to the next. Bobbie loves music so as soon as he’s able, he makes the trip to Hollywood to try to find a place in the music business. But years of neglect and abuse produces a youth with rage, paranoid delusions, and a tendency towards violence. Joyce Carol Oates captures the tortured mental landscapes of her characters like few other writers.

The second half of The Triumph of the Spider Monkey is a novella called “Love, Careless Love” that shows Gotteson’s violent rampage from the viewpoint of a woman who survived the experience. If you’re a fan of psychological suspense novels, The Triumph of the Spider Monkey will leave you sleeping with the lights on for a few nights. And you’ll love the great Robert McGinnis cover, too! Once again HARD CASE CRIME has rescued a classic book from the Mists of Time! GRADE: B+

17 thoughts on “FRIDAY’S FORGOTTEN BOOKS #538: THE TRIUMPH OF THE SPIDER MONEY By Joyce Carol Oates”