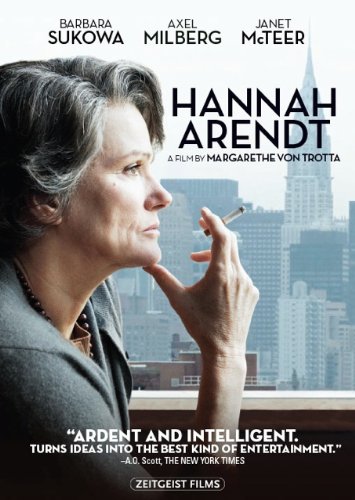 After reading Hannah Arendt’s Thinking Without a Banister, I thought I’d watch Hannah Arendt (2013), a DVD I’ve had on my shelves for years. Barbara Sukowa plays the intense, chain-smoking philosopher during the tumultuous period of Arendt’s life when she accepted the invitation of editor William Shawn (Nicholas Woodeson) of The New Yorker to cover the 1961 trial of Adolf Eichmann. Director Margarethe vin Trotta weaves actual archival footage from the famous trial into the story. Arendt’s articles in The New Yorker created a firestorm of controversy in the Jewish community. Her analysis of “the banality of evil” enraged many who wanted Eichmann painted as devil not as a bureaucrat who was “just following orders.” Arendt’s suggestion that Jewish leaders working with Eichmann during the Holocaust were complicit in the results unleashed consternation in Israel and the U.S. When the articles were published in book form, Eichmann in Jerusalem (1963), the book and its author became sensations.

While watching Hannah Arendt, I especially liked Janet McTeer as Mary McCarthy who encourages Arendt during this stormy episode when she’s being attacked on all sides. Barbara Sukowa creates a fiercely ethical woman who reports what she believes to be the truth and stands up to the Establishment while being lobbied by “friends” who want a specific political outcome. You can’t watch Hannah Arendt without admiring her integrity and courage during troubled times. GRADE: A-