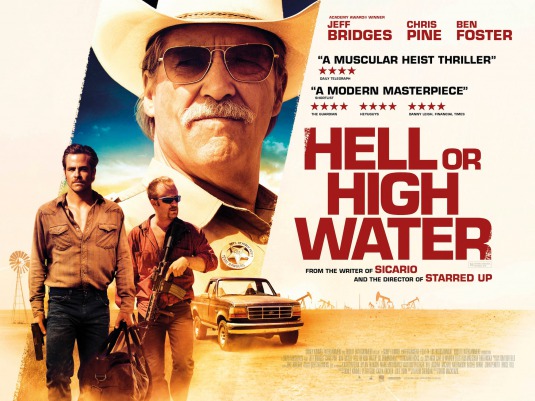 My take on Hell or High Water differs from the reviews in major publications. Two brothers need $25,000 to save their ranch in Texas in 2008. Now, I can think of a half-dozen ways to legally acquire $25,000 off the top of my head. But these two brothers decide to rob banks. Jeff Bridges plays a Texas Ranger on the cusp of retirement. This series of bank robberies will be his last case. The first few bank robberies go well, but of course things start to go wrong. All of this happens within the terrible economic conditions of West Texas. For Sale signs litter the landscape. Poverty is everywhere. Chris Pine and Ben Forter play brothers with issues. Director David Mackenzie captures the desperation of people as the economy spirals downward. The resolution with Chris Pine’s sour ex-wife and his two sullen sons undercuts his actions. GRADE: B

18 thoughts on “HELL OR HIGH WATER”