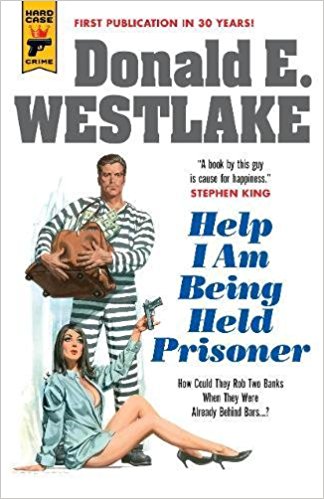 I first read Help I Am Being Held Prisoner when it was first published in 1974. Now, HARD CASE CRIME has reprinted this Westlake classic and provided it with a great cover by Paul Mann. Harold Albert Chester Kunt finds himself in prison as a result of a practical joke that went awry. While in prision, Kunt falls in with a group of convicts who secretly have a tunnel that leads out of the prison. They leave the prison on a regular basis without the guards knowing it. But, of course, they return to prison to keep up appearances. With this comic setup, Westlake creates a cunning comic caper novel where Kunt’s convict “friends” want to rob a bank in a nearby town. And they plan to include Kunt in the heist.

Help I Am Being Held Prisoner ranks up there with Westlake’s more famous and hilarious Dortmunder series. The plot is clever and the comic situations just keep you laughing. It doesn’t get much better than this! Highly recommended. GRADE: A

10 thoughts on “HELP I AM BEING HELD PRISONER By Donald E. Westlake”