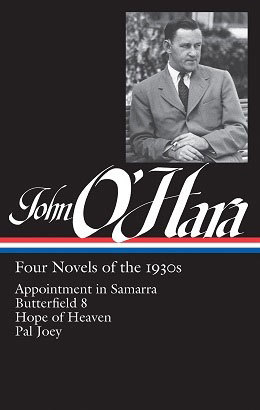 For most of the 20th Century, John O’Hara was considered one of the best short story writers in the world. O’Hara tried his hand at novels, with mixed results. His first novel, Appointment in Samarra (1934), a story of destiny and tragedy, remains one of O’Hara’s most popular books. Butterfield 8 (1935) explores the speakeasy world of a hedonistic Manhattan. Gloria Wandrous, based on a woman O’Hara knew, lives in a world of alcohol and sex. In 1960, a greatly “modified” version of Butterfield 8 earned Elizabeth Taylor her first Academy Award,

Hope of Heaven (1938) is set in Los Angeles and centers around a relationship between Peggy Henderson, a young leftist woman working at a bookstore, and Jim Malloy, a world-weary screenwriter. struggling to make it in Hollywood. In Pal Joey (1940), a novel in the form of fourteen interconnected stories, O’Hara’s mastery of the short story comes into play to create one of his most powerful works. This novel was also the basis for the Rodgers & Hart musical. These four novels, flaws and all, are worth reading. Are you a John O’Hara fan? GRADE: B+