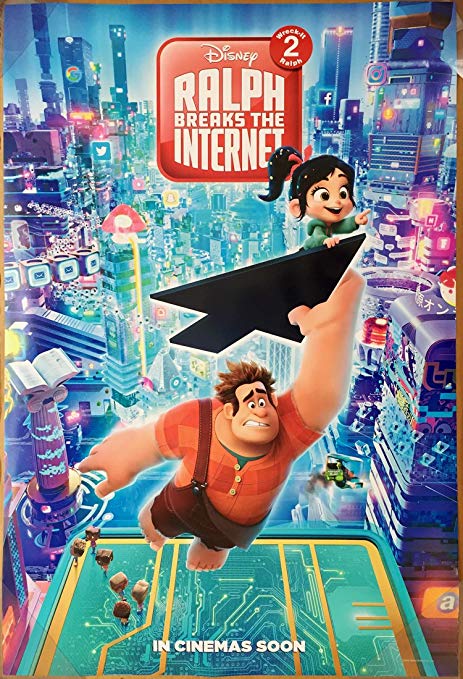 It took us a while to catch up with Ralph Breaks the Internet but with the Holidays over and the kids back to school, Diane and I enjoyed what amounted to a Private Screening when we attended a matinee showing. We liked the 2012 Wreck-It Ralph animated movie featuring 1980s arcade games with their wacky characters. Director and co-writer Rich Moore cleverly created Ralph (John C. Reilly) a “Bad Guy” in a video game who was actually a pretty good guy outside his game. In this sequel, Ralph is happy with his life, but his best friend, racer Vanellope (Sarah Silverman), is bored by her Candy Rush game. When their arcade gets a WI-FI connection, Ralph and Vanellope discover the Internet.

Unlike Wreck-It Ralph, Ralph Breaks the Internet doesn’t really have a villain. Most of the mischief is caused by Ralph himself as he tries not to lose his best friend to a Grand Theft Auto clone game called Slaughter Race featuring the beautiful and skillful Shank (Gal Gadot). For a kids movie, Ralph Breaks the Internet deals with the risks of online shopping, pop-up ads, viruses, and the Dark Web in a surprisingly sophisticated fashion. There’s a lot going on in this movie. Most of it is fun. GRADE: A-

6 thoughts on “RALPH BREAKS THE INTERNET”