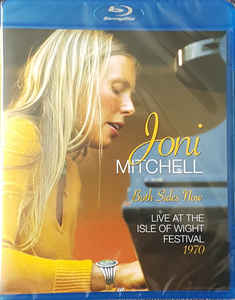 My first reaction to watching Joni Mitchell, Both Sides Now: Live at the Isle of Wight Festival 1970 was…bravery. Wispy 27-year-old Joni Mitchell, alone on the concert stage and surrounded by The Who’s mountains of speakers, faced a hostile crowd of 600,000 attendees. A mob of people were trying to break down the fences to enter the Festival without paying. Radicals were accusing the musicians of “playing for money” when everything should be free!

Into this volatile situation, the Festival promoters maneuvered Joni Mitchell on the stage. “They threw me to the Beast,” Joni Mitchell says in her commentary. Alternating between her guitar, piano, and dulcimer, Joni Mitchell gamely tried to reach out to the acres of people. There’s noise, there’s disruption. You can see the frustration and anguish on Joni Mitchell’s face as the audience grows more ugly. And, amazingly, Joni Mitchell faces down those 600,000 people and brings order out of chaos. It’s one of the most courageous performances I’ve ever seen. And, all the while, Joni Mitchell’s voice soars over the restless Festival attendees.

18 thoughts on “JONI MITCHELL, BOTH SIDES NOW: LIVE AT THE ISLE OF WIGHT FESTIVAL 1970 [Blu-ray]”