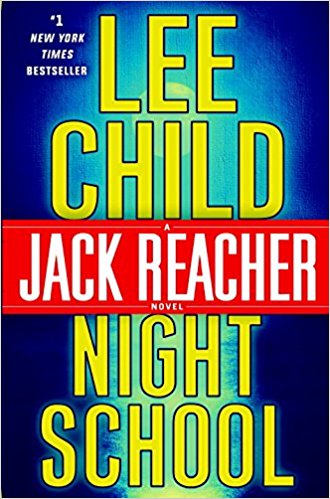 I’ve been trying to catch up with Lee Child’s Jack Reacher novels. I really liked Child’s Make Me. You can read my review here. Night School was published in 2016 and is set in 1997 when Jack Reacher was a Major in the Military Police. Reacher finds himself sent to a “school” that in reality is a task force investigating why a U.S. citizen is selling “something” to a terrorist group for $100 million.

I enjoyed Night School but some aspects of the novel annoyed me. Jack Reacher has “hunches” and nearly every one of his hunches pay off. Reacher gets to beat up some neo-Nazis and sleep with his boss. Everything comes a little to easy for Reacher in this novel. He barely breaks a sweat. The search for the U.S. citizen is clever and compelling. The $100 million “something” was a little more challenging to figure out, but I was pretty close. I find Jack Reacher novels ideal for reading during airline flights and doctor’s appointments. Do you have a favorite Jack Reacher novel? GRADE: B