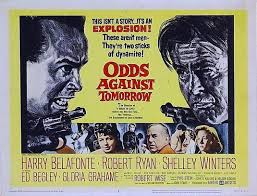 When I reviewed Kiss Me Deadly a couple weeks ago, Todd Mason mentioned Odds Against Tomorrow, a movie I hadn’t seen in three decades. I found a DVD of Odds Against Tomorrow and watched it. I also had a copy of William P. McGivern’s novel that the movie is based on so I read that, too. In the novel version, Earl Slater (a sociopath), Johnny Ingram (a gambler who owes too much money to the loan sharks), and Burke (a former cop) plan a bank job. The structure of the movie and the book differ. In the novel, the bank job takes place about mid-way through the book. In the movie, the bank job happens almost at the end of the movie. The movie’s explosive finish isn’t in the novel. The movie starred Robert Ryan as Earl, Harry Belafonte as Johnny, and Ed Begley as Burke. Director Robert Wise chose to focus on the racial tension between Earl and Johnny. The screenplay by Abraham Polonsky and Nelson Gidding scintillates! GRADE: A-

20 thoughts on “ODDS AGAINST TOMORROW”