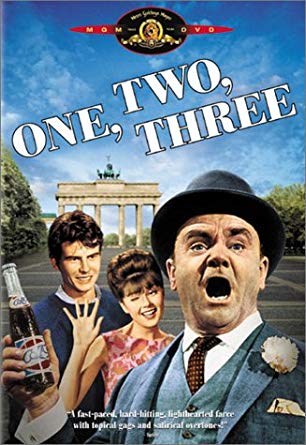 One, Two, Three (1961) stars Jimmy Cagney and Arlene Francis in a movie directed by Billy Wilder. Cagney plays the head of Coca Cola in West Berlin. He dreams of being promoted to the Coke Head of Europe. Cagney’s boss sends his wild, 17-year-old daughter, Scarlett Hazeltine, to West Berlin to get her away from her boyfriends in Atlanta. Cagney thinks he has things under control, but discovers Scarlett has been secretly slipping out at night and visiting East Berlin. And, of course, Scarlett now has a new love interest: Otto the Communist.

Some of the jokes and plot in One, Two, Three reflect the Cold War. The Russians and East Germans are caricatures. Cagney rockets around his office trying to juggle all the various elements of his schemes while Arlene Francis tries to hold his family together. One, Two, Three was Jimmy Cagney’s last movie until his cameo 20 years later in Ragtime. Are you a fan of Cagney and Arlene Francis? GRADE: B-