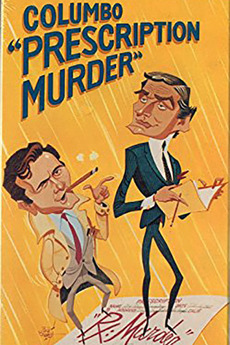 Richard Levinson and William Link wrote a short story in the 1950s, “May I Come In?” (Alfred Hitchcock Mystery Magazine under the title, “Dear Corpus Delecti”). That short story was adapted by The Chevy Mystery Show in 1960 under the title “Enough Rope.” Two years later, Levinson and Link’s play, Prescription For Murder, opened at the Curran Theater in San Francisco. The play was not successful, but when it went on tour, Link says, “It made a fortune.”

Columbo became part of the NBC Mystery Movie series from 1971 to 1978. Bing Crosby was the first choice for the role. When Bing turned it down, Lee J. Cobb was approached. He had no interest. Peter Falk was hired and told Link, “I would kill to play that cop.” Falk went on to win four Emmys for his portrayal of Lieutenant Frank Columbo.

Diane and I saw Prescription for Murder: Columbo at Desiderio’s Dinner Theatre in Cheektowaga, a Buffalo suburb. The local actors who put on the play were competent and occasionally clever. The play presents the murder of a wife by her psychiatrist husband. It looks like a perfect crime, but Columbo slowly unravels the scheme. We enjoy the production and would come back in the future. Do you have a favorite episode of Columbo? GRADE: B+

22 thoughts on “PRESCRIPTION FOR MURDER: COLUMBO”